The Puget Sound & Pacific Railroad is a 158 mile shortline that is headquartered in Elma, Washington. They began operations on August 30, 1997. It is a division of Genesee & Wyoming Inc. The PS&P interchanges with the BNSF and the UP near Centralia, Washington. From there, the line reaches west to Hoquiam, Washington and northeast to Bangor, Washington. The line operated by the PS&P was purchased from BNSF in August of 1997. Much of the line was originally constructed by the Puget Sound & Grays Harbor Railroad in 1890. The NP purchased this line from Summit to Montesano shortly after the PS&GH started operations. The NP then completed a line from Centralia to Elma and from Montesano to Grays Harbor bringing rail service to Grays Harbor in 1892.

The PS&P primarily operates Monday through Friday, interchanging with BNSF and the UP each day at Centralia. This train returns to Elma where it is separated into trains for Grays Harbor and Bangor, both leaving Elma in the mornings.  PS&P also handles unit grain trains from the BNSF interchange in Centralia to the export terminal in Aberdeen, Washington, as well as outbound unit garbage trains for the UP. 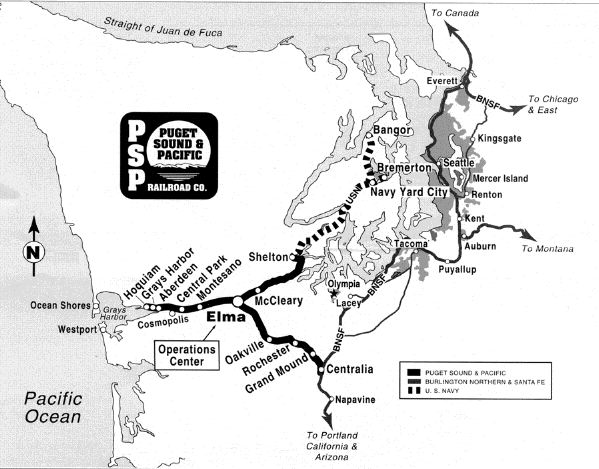